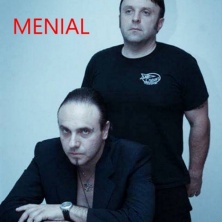 Liederliste
Il nostro repertorio riguarda musica originale creata e scritta da noi.
Il nostro genere è un electro rock /new wawe.
Setliste
Biographie
.The group was founded at the beginning with the name of Elyan, and proposed an electronic crossover. The group effect in 98 a CD titled sync, making numerous concerts in Italy and Switzerland. After various experiences the group changed its name to menial proposing a sound renewed. The band record a CD in 2005 headed by a desire total number of concerts in Switzerland. Thank pop909 have created the site, and the memories live video capturing the atmosphere of the group in concert. We are now working to finish the new CD will 6 new songs .2011 years after the group finally finds the keyboard which will be held concerts and new ideas to work on new material for a new CD. New single out now "this is the time " 10.2011 OUT OF OUR VIDEO AND THIS IS THE TIME THANKS ANTONELLA GEROSA ¨ IN THESE DAYS AND RELEASED THE SECOND SINGLE WITHOUT YOU GO OUT THAT SHORT VIDEO
Pressefoto